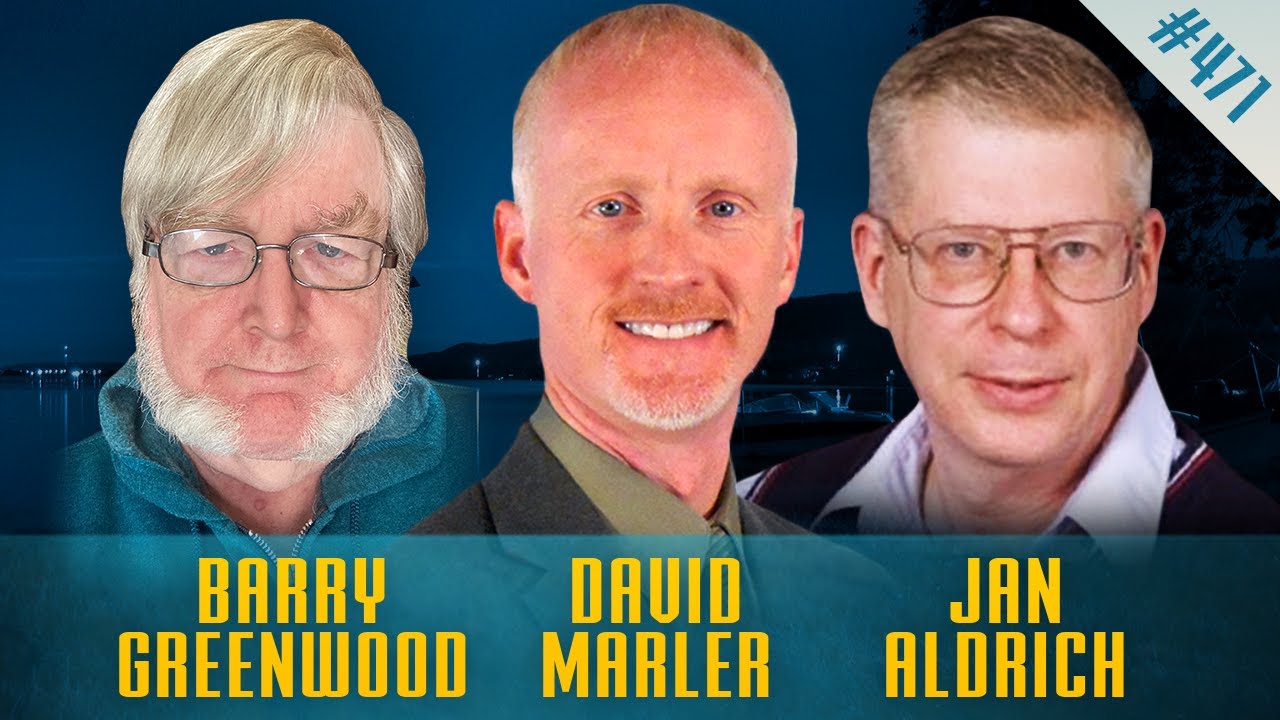 BARRY GREENWOOD has pursued UFO and other aerial phenomena topics since 1964. Served as an investigator and state section director for Massachusetts MUFON for ten years. Specialized in researching government documents in the late 1970s, leading to co-authoring the book “Clear Intent” (with Larry Fawcett) in 1984. Also edited the newsletter “Just Cause” for “Citizens Against UFO Secrecy” (CAUS) from 1984 to 1998. Other research has been published in the “MUFON Journal,” “Flying Saucer Review,” “International UFO Reporter,” “Stendek,” “Lumieres dans la Nuit” and a variety of other national and international publications since the mid-1970s. In more recent years, he has specialized in UFO history, compiling “The New England Airship Wave of 1909” and editing “U.F.O. Historical Revue,” a newsletter issued from 1998 to date. Also contributed to the history book “UFOs and Government: A Historical Inquiry” (2012). SEE FULL BIO IN SHOW NOTES

DAVID MARLER has had a lifelong interest in the UFO subject and has actively investigated and researched the subject for 31 years. He joined The Mutual UFO Network (MUFON) in 1990 as a Field Investigator Trainee. Since then, he has served as Field Investigator, State Section Director, as well as Illinois State Director.
During his tenure with MUFON, he had conducted numerous investigations into alleged UFO sightings and related experiences. He has discussed the subject of UFOs on numerous radio and television news programs over the years. He has also lectured on the subject to numerous school and adult audiences including at the university level.
David has assisted the History, Learning, Discovery, Science, and Smithsonian Channel as well as numerous independent UFO documentary productions from various countries over the years. He was seen in the Australian 7 News Spotlight show, The Phenomenon, with mainstream journalist, Ross Coulthart. He also has appeared on live Russian TV news, RTVI, to discuss the UFO subject. He has established himself as an internationally-recognized UFO researcher.
David has one of the largest personal libraries of UFO books, journals, magazines, newspapers, microfilms, audio recordings, and case files from around the world that covers the last 75+ years. With this he has been examining the detailed history of UFO sighting reports and related patterns. SEE FULL BIO IN SHOW NOTES

JAN ALDRICH resides in Canterbury, Connecticut, USA. Education BA History from University of Maryland, Retired US Army Master Sergeant with assignments in meteorology, intelligence, personnel, and safety. Assignment locations include four in Korea, two in Germany, one in Italy, two at the Field Artillery School, Fort Sill, Oklahoma, and others in the US. Also, retired from the US Postal Service. Studied UFOs for over 55 years. Contributing author of the book “UFOs and Government”, also author of reports on Ghost Rockets, the 1947 UFO Wave. Currently working on digitizing project of the Center for UFO Studies UFO report files. Correspondent for overseas UFO magazines. Website www.project1947.com
#project1947 #UAPArchives #UAPResearch