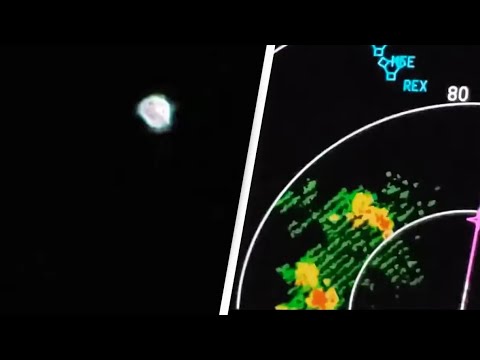 Footage has emerged of what appears to be a ‘pulsating orb’ dropping out of the sky over Mexico.

The unidentified flying object – which didn’t appear on radar – was caught on camera by two FedEx pilots on March 19, 2020, with the footage later being examined by the National Aviation Reporting Center on Anomalous Phenomena (NARCAP), which wrote a report on the incident.

In the footage, one of the pilots exclaims, ‘That is an unidentified flying object, bro. I can finally say I saw one now, that is cool. And it’s pulsating too man, that is nuts.’

While they first believed the ‘yellowish white light’ was a meteor, the pilots readied themselves to take evasive action when the orb shone a white light on the aeroplane, believing that it was another plane with its landing lights on.

The object then came to a stop, however, and then tracked the plane for 30 minutes.

The pilots described a teardrop-shaped ‘brilliant yellow white plasma object’, adding that it had ‘no navigation lights or other features associated with airplanes and that the light seemed to have a tail’.

View all posts by Scoop News →