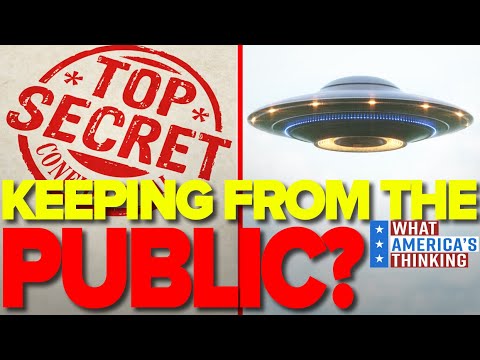 On today’s What America’s Thinking, a new Hill-HarrisX poll finds 70 percent of voters said the U.S. government has more information about UFOs/UAPs than it is currently telling the public.

This survey was conducted online within the United States from June 17 – 18 among 942 registered voters by HarrisX. The sampling margin of error of this poll is plus or minus 3.19 percentage points. The results reflect a nationally representative sample of registered voters. Results were weighted for age, gender, region, race/ethnicity, income, political party, education, ideology and area type where necessary to align them with their actual proportions in the population.

The U.S. government has encountered more than 140 of what it calls unidentified aerial phenomena (UAP), more commonly known as UFOs, according to an unclassified intelligence report released Friday.

Of the 144 such encounters, just one was identified with high confidence while the others remain a mystery, the Office of the Director of National Intelligence (ODNI) said in a report sent to Congress.

The report offered a rare public accounting of what the government knows and what it doesn’t in an area that has long captured the public imagination, particularly for those seeking signs of extraterrestrial life.

You can read more here: https://thehill.com/policy/national-security/560326-us-intel-report-confirms-more-than-140-ufos